Help the CWA prepare for upcoming contract negotiations by letting us know your priorities for 2023 and beyond. Our current contract expires on June 30, 2023. 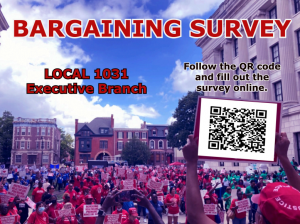 State Workers can make changes to their healthcare plans during the month of 2023.

For more information & to find out how to calculate what your costs will be for the next year, please visit our Healthcare Ombudsperson Program page.

Please closely review this important information regarding your health benefits.

CWA, in coalition with AFSCME, AFT, IBEW, IFPTE and the Council of NJ State College Locals, have reached an agreement with the State of NJ regarding the massive State Health Benefits Plan (SHBP) premium increases which will take effect for 2023. This agreement drastically reduces the impact of those premium increases on our members.

The State notified CWA in July that its actuary for the SHBP recommended raising premiums by 20.7% for the plans in which state employees are enrolled. CWA immediately asserted our rights under our Contract to negotiate over these increases. We were quickly joined by the other Unions representing state employees whose members were also affected.

Supported by thousands of phone calls, the rally at the State House, and other mobilization, CWA and our union coalition reached an agreement with the State to greatly reduce the impact of the proposed premium increases, effective January 2023:

For example, a member with family medical and prescription coverage earning $50,000 per year will contribute only $68 more per year, or $1.31 per week, than their current rate.

When the CWA bargaining team negotiated over health insurance in our current contract (2019-2023), we made two significant changes. Both of those negotiated changes have protected our members now as we faced increased health care costs from the COVID pandemic and other factors.

First, we created the CWA Unity PPO plan which reduced total premium costs for both employers and members. Premiums were reduced by around 11% from the prior plans and members shared in those savings. Members saved thousands of dollars over the life of our current contract. The new plan and new contribution rates also extended to the Judiciary and have been adopted in other units around the state. Members, the State, and local government employers who use this new plan, have saved millions in health insurance premiums and contributions since 2019.

Second, we negotiated re-opener language in our contract so that any premium increases in future years would require the State to come to the negotiations table rather than impose increases. Through negotiations, the Unions and State were able to reduce costs but protect quality benefits.

Both the plan changes from 2019 and the re-opener language prevented the State from imposing these costs on members without negotiations. Collective bargaining worked to protect our plans and defend against drastic premium increases.

Urgent Care utilization rose sharply in the past two years, which we believe was a result of COVID. The Union will continue to assist members with urgent care needs through lower-cost, higher quality alternatives like primary care physicians and the NJ Direct Primary Care medical home program.

Thanks to all the CWA members who participated in mobilization activities which made this agreement possible. Please make every effort to participate in upcoming membership meetings with your Locals.

Employees enrolled in the SHBP can now get coverage for at home COVID-19 test kits through the OptumRX prescription plan.